From the Vault: Cliffhanger 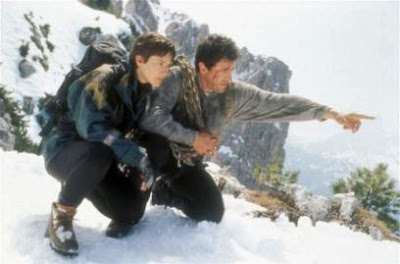 Money can't buy everything. It can purchase Sylvester Stallone's services or it can acquire a good screenplay. Stallone stars in Cliffhanger, so guess what the movie lacks.

Stallone plays Gabe Walker, an employee of the Rocky Mountain Rescue Team. They scale the rugged terrain to aid hikers and climbers when nature gets the better of them. At the film's outset, Walker comes to the aid of his co-worker Tucker (Michael Rooker), who has scaled a tall peak with his inexperienced girlfriend.

Of course, don't stop to think logically. It has no value in a film like Cliffhanger so don't even bother asking yourself how a woman with no climbing skills got that high up the mountain in the first place. In fact, implausibilities stack up to a height that might rival Mount Everest.

Needless to say, it comes as no surprise when the rescue goes awry, the woman plunges to her death and Stallone blames himself. Given the film's formula nature, the script, the genre and Stallone, you know that he'll leave the mountain, wracked with guilt, only to return in a situation that requires him to conquer his fears.

Except that's not quite what happens — Walker shows no qualms about returning to the mountain (aside from when it's convenient for the plot) and Tucker's animosity only comes to the surface in a single scene before they again band together to fight the film's personification of evil. The evil in this case turns out to be a band of (surprise again) international thieves led by John Lithgow, who appears as bored being in this film as the audience is watching it. He looks as if he could steal the film at any time, but why on earth would he want to?

With the help of a crooked Treasury agent (Rex Linn), Lithgow and his gang have attempted to hijack a shipment of government cash, only the theft gets bungled the three suitcases full of greenbacks plummet to the mountain range, followed by the plane itself. Having no tracking skills of their own or climbing equipment, the crooks trick the Rescue Team into helping them find the money and put in place the film's interminable cat-and-mouse chase between Stallone and the bad guys.

Along the way, the usual elements rear their ugly heads: lame quips at inappropriate moments, slow motion yells, explosions and poetically justified deaths. Directed by Renny Harlin, who somehow gained a reputation as a good action director though he's only made three bad movies (Die Hard 2, Nightmare on Elm Street IV and The Adventures of Ford Fairlane), the film does manage some nice set pieces, particularly the hijacking sequence. Aside from those few touches, even the action leaves much to be desired. When they get around to the requisite mano-a-mano between Stallone and Lithgow, the stunt looks neat but it plays out so predictably — down to when the bite occurs and how Lithgow dies — it just induces yawns.

It puzzles me why they even tried to add emotional weight to this film because the filmmakers discard it as soon as they've finished wheeling out a couple of poorly written melodramatic scenes. The characters — and I use that term loosely — are so poorly developed that only ones who seem well drawn are two twentysomething thrill seekers in a brief cameo. If the producers had brains or daring — and this film shows no evidence that they possess either — they might have tried to re-create the trailer for Cliffhanger as the film.

Dump the dialogue entirely and just present a nonstop chain of action sequences set to classical music. The result would be the same, the film would be mercifully shorter and we wouldn't be forced to listen to Stallone's anguished battle cries.

Comments:
Aw, c'mon! I liked this movie! It's not great, but I found it entertaining in that bad action movie kind of way. I would run it at the Shameful Movies of Odie's Past Festival this year, but I've already got two bad but Odie liked 'em Stallone movies to put there already.

I also liked Die Hard 2, but it's nowhere near as good as the original.

Now Cutthroat Island--THERE's a bad Renny Harlin movie. And that Geena Davis-Samuel L. Jackson mess too, though I love Sam's "I will hire somebody to ass-BLEEP you!" speech.

Well, inexperienced people being "pulled up a mountain" does happen, and in a relationship is one way it can.

For anyone into mountain stuff or just wondering, I recommend "Into Thin Air" by Jon Krakauer. Yes, less experienced people do end up on mountains, often with experienced guides, and there are mixed schools of thought on that among climbers.

I always liked this movie, I think Stallone is darn good in it, and John Lighgow is a heck of an actor too. Janine Turner has strong points too, but I really dug the story and atmosphere. It is sort of a classic "Berg film" in some ways, but it really really works.