From the Vault: Clerks 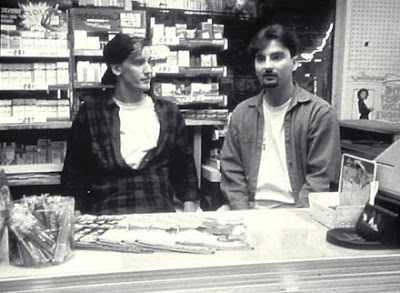 Though the new generation of filmmakers such as Quentin Tarantino certainly has good visual sense, perhaps their biggest selling point is their verbal acuity.

In fact, the fine art of conversation, or what passes for it in the laid-back lifestyles of two working class twentysomethings, makes writer-director Kevin Smith's film debut, Clerks, stand apart. Made for a meager $27,000 in black and white, Clerks tells the story of Dante Hicks (Brian O'Halloran), a New Jersey convenience store clerk called in on an emergency on his day off. Needless to say, he's none too happy to be at the Quick Stop.

Dante's best friend Randal (Jeff Anderson) helps him pass the time since he works at the neighboring video store, doing his damnedest to drive away every customer so he can loaf.

Dante's love life preoccupies him, namely his girlfriend Veronica (Marilyn Ghigliotti) and the return of a past obsession named Caitlin (Lisa Spoonauer).

The joy of Clerks comes from its often witty and decidedly vulgar dialogue, which will probably resonate more the closer you are to the characters' age or working plight.

As a writer, Smith peppers the script with philosophical musings and romantic ramblings that keep the viewer consistently entertained. His directing skills don't equal his writing prowess, unfortunately, as the pace sometimes slacks off and he doesn't use the camera to its fullest potential.

Clerks may be a slight film and not for everyone's taste, but it amuses. It's more like overhearing an interesting conversation than actually watching a movie.