From the Vault: Baywatch 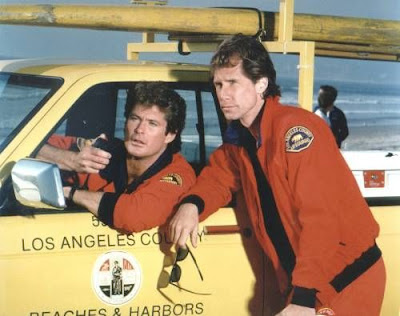 ORIGINALLY PUBLISHED FALL 1989
When someone finds this writer curled up in a fetal ball staring blankly at a TV screen, that person might say, "The sitcoms got him" but it wasn't the sitcoms — 'twas Baywatch killed the critic.

Four new TV shows remain that I have yet to review (Young Rider, Top of the Hill, Booker and Mancuso, FBI). From here on out, our faithful readers will have to fend for themselves.

The saddest part about Baywatch for those who see it is the fact that brain cells do not regenerate and I consider myself fortunate that I'm not lying in a coma after enduring Friday's episode.

Memories of the 1970s flooded my mind as I watched the opening credits, which consist of every wet member of the cast jogging toward the camera in swimwear. Even the 10-year-old son of one of the character charges the TV screen sans shirt. It's a monument to T&A.

In case you don't know, and I pray that you don't, Baywatch is NBC's new "leer and jeer" show about California lifeguards. It stars David Hasselhoff of Knight Rider fame and Parker Stevenson, half of The Hardy Boys. Hasselhoff plays a lieutenant, a career lifeguard. I'm not up on my salaries for lifeguards who make the rank of lieutenant, but his character certainly owns an expensive looking beach house.

You know, I think he made the right call by taking a $187.50-an-hour pay cut so he could keep watch over a beach devoid of even one ounce of extra cellulite. Other storylines involved Hasselhoff's friend who kidnapped his son from his ex-wife and a young lifeguard lusting after a beautiful girl on the beach.

My favorite moment came as Stevenson and Hasselhoff, in an effort to save two kids trapped in a drainage ditch, discussed their problems while crawling through a concrete tube. Nothing pleases me more than listening to two men debate whether or not he could keep his locker if he quit his job. Not much more needs to be said about Baywatch unless I go ahead and mention its insipid writing and below-par acting, but this is the last TV show I'm going to review. This critic is retiring his TV and VCR to pursue more worthwhile activities such as making sculptures out of popsicle sticks or standing on a bridge and lobbing mashed potatoes at passers-by.

The 1980s, overall, provided much in the way of quality of television: Cheers, Hill Street Blues, St. Elsewhere, Moonlighting, L.A. Law, The Wonder Years, The Days and Nights of Molly Dodd, Newhart, Murphy Brown — the list goes on. However, the new shows premiering for the 1989-90 season indicate that the golden age has ended and we face a return to the horror days of the 1970s when Charlie's Angels, Three's Company, B.J. and the Bear and all of that ilk reigned supreme. In a season filled with spinoffs of Who's the Boss? and Perfect Strangers, can a Return to Supertrain movie be far behind?